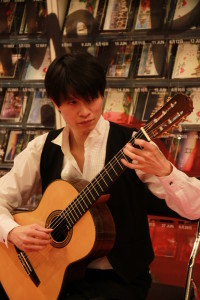 A guitarist with exceptional musicality and guitaristic technique, Daniel is renowned as a talented musician for his attention to detail and provocative lyrical phrasing which bring each piece he plays to life.

Daniel performed in London, Manchester and Vancouver. In addition to performing for television shows, commercials and radio programmes, he was invited to perform for London Bolivar Hall, British Columbia Arts Council, New Westminster Arts Council, City of Burnaby, and City of North Vancouver. He was also elected as musician for Translink Musicians Program in Vancouver.

During his studies at Royal College, Daniel won the Salon Prize and the Guitar Major Award.

“… Daniel Sebt, a guitarist with extraordinary charisma and artistry …”
“… a talented musician …”

“… Daniel Sebt, a guitarist with extraordinary charisma and artistry …”